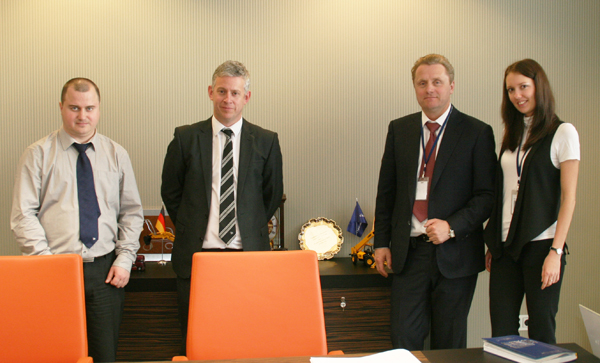 On 19th of March 2012 Predpriyatie Stroykomplekt Ltd. was visited by JCB UK Designer Mr.Richard Harrison, who is responsible for JCB standards for offices all over the world.

The first thing guest visited construction site of JCB Techno-Trade Center, which is situated on the first kilometer of Ekaterinburg ring road. The President of Stroykomplekt Company Mr.Viktor Poddubitskiy demonstrated the current stage of construction.

Negotiations continued in the central office of Predpriyatie Stroykomplekt Ltd., which was highly appreciated by English designer. During negotiations the design project of the Center was presented and the correspondence to all JCB standards was discussed.

On the 21st of July, the 20th anniversary of Predpriyatie Stroykomplekt, the first cubic meter of concrete was laid in the construction of Techno-Trade Center, which would be launched in 2012 and become the biggest JCB Depot in Europe.

Taking in to account success of the Company on Urals market of road construction equipment and also intensions of Stroykomplekt company to develop JCB sales outside the Ural District, JCB UK Management decided to expanse the dealership territory up to the Far East Federal District.