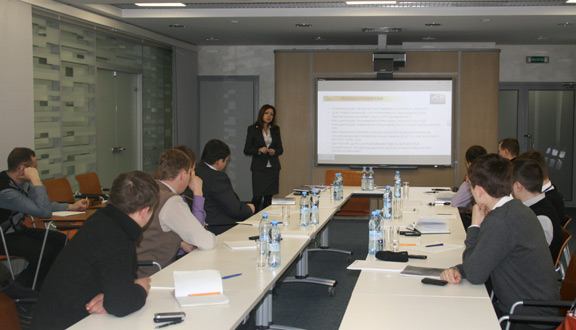 On February, 15th on the territory of LLC “Predpriyatie “Stroykomplekt” there was a training for service specialists and managers of sales of spare parts and attachments from a central office, Tyumen, Chelyabinsk and East Siberia subsidiaries. The training was held by representatives of a company “JCB Russia” Alexey Starikov, Sergey Morozov and Alexandra Sokolova.

The following questions were discussed during the training:

1) Acceleration of problem-solving concerning warranty claims and their fast elimination.

2) Prompt delivery of spare parts. In case if a necessary spare part is available neither at a warehouse of LLC “Predpriyatie “Stroykomplekt” nor at a Moscow warehouse, which operates twenty-four-hour from January 2012, there is a possible prompt delivery from a World Part Center, which is located in England and operates 365 days a year 7 days a week and twenty-four-hour.

3) Universality of JCB attachments which can be used on special equipment of other manufacturers.

LLC “Predpriyatie “Stroykomplekt” is an official dealer of a JCB company on the territory of Ural federal region and East Siberia and it completely meets all standards of rendering of after-sales client support.