The unique trick of Chetra bulldozers entered the Guinness Book of Records. 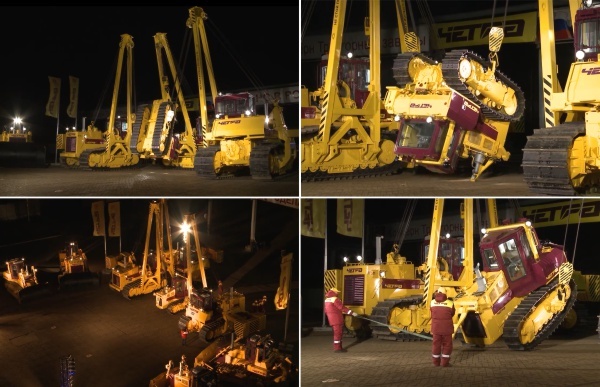 On 27th December 2011 according to the examination department of editorial board of the Guiness Book of Records, the decision to accept application for being the official record in Russia in the following category “The only one bulldozer flip around its axis on the ropes” was made unanimously. Aleksey Svistunov, the chief editor of the Guiness Book of Records, said that the evidence base of application was recognize as corresponding to the provided data.

To recall, the unique tractor show according to the scenario of which the flip coup of Chetra Bulldozer T9 was implemented with the help of three powerful Chetra pipe layers TG511. On 5th November 2011 the event took place on the demonstrational site of OJSC ”Promtractor” and  received the high estimation both of the experts and the audience among of whom there were many customers of Chetra machines.

The unique trick you can find at the link:
http://www.youtube.com/watch?v=Mwb7654WZPk

LLC “Predpriyatyie”Stroykomplekt” is an official dealer of OJSC “Chetra-Industrial machines” for the sales of bulldozers and pipe layers of Chetra brand in the territory of Sverdlovsk and Chelyabinsk regions.